Depending on their specific needs, fire departments are saving money, time, and effort by tagging onto an existing apparatus purchase contract by another fire department. Most departments find there are a number of substantial advantages to be found in a tag-on purchase, heavily outweighing any drawbacks inherent in the process.

Phil Gerace, director of sales and marketing for KME, says one of the reasons departments look to tag-on purchasing is that the traditional apparatus bidding process takes a long time to do. “While you’re going through that process, there are high administrative costs going on-the operations and fleet management people have to take the time to write the bid, there are legal review costs, there’s the high cost of publishing the bid through advertising and getting it into people’s hands, and the cost of any salaries during that time,” Gerace says. “It typically takes a year from the start of writing the apparatus spec to cutting a purchase order to buy it. And while that year is going on, the prices of components are usually going up too.”

Still, the most frequent way departments buy apparatus is through their own bidding processes, Gerace says. The second most used method is through a scheduled contract, such as the Houston Galveston Area Contract (H-GAC), while the third most popular way to buy is through a tag-on contract, he says.

Gerace says the tag-on process (also known as an add-on) comprises two strategies-adding onto a department’s own purchase (e.g., buying two vehicles on the same contract) or tagging onto someone else’s purchase. “We offer both types of options for customers,” he points out. “Usually there’s a period of years where you can tag onto your own contract with pricing increases built into it. Typically it’s only for the same vehicle, but you could conceivably do some small changes with a tag-on vehicle.”

A more popular option than a tag-on contract, Gerace maintains, is a long-term purchasing agreement (LTPA). “With an LTPA, you can structure the purchases for multiple years, as long as the price structure reflects potential increases as the contract runs,” he says. “LTPAs are a huge benefit to standardizing a fleet, which benefits training and maintenance. It also saves administrative costs on future purchases, the service and parts costs are lower, and training costs are lower. These agreements usually are for five years, but some run for as many as ten years.”

Scott Oyen, Rosenbauer’s vice president of sales, points out that LTPAs also are gaining traction with the economy still running on the slow side. “A department might sign an LTPA for a custom pumper, bid it for a set amount, set the term for a number of years, and use the consumer price index (CPI) as a guide for increases in pricing,” Oyen says. “Also there usually is wording in there to account for any National Fire Protection Association (NFPA) standard changes or federal engine emission changes.”

Tagging onto another department’s contract usually comes about when a sales representative draws a bidding department’s attention to a purchase similar to theirs, Gerace says. “Usually the purchase being tagged onto has been competitively bid with multiple bidders, and tag-on bidders will want to see the bid and purchase documents for the original purchase to see if it fits their needs for tagging on.”

Gerace points out that KME had a large purchase several years ago by the Los Angeles County (CA) Fire Department where the department bought dozens of pumpers and aerials. “Surrounding departments were encouraged to tag onto the contract, and in the end, the tag-ons exceeded the LA County purchase itself,” he says.

Chris Wade, Mid-Atlantic region director for E-ONE, says the H-GAC scheduled contract started out as a Houston consortium of counties using their combined purchasing power to be more efficient for government and has since expanded to being recognized by 49 states. “Any manufacturer can be H-GAC,” he says, “where the company proposes a base model and listed options that are reviewed and approved by H-GAC. They have an online catalog of pricings and drawings, and H-GAC gets a $2,000 administrative fee for every fire truck purchase order bought through them.”

Options are available through H-GAC, Wade notes. “After you add up the total of the base model and the add-on items, you get your purchasing price,” he says. “H-GAC will allow up to 25 percent of the purchase price to be unlisted options on the apparatus, so it allows for a lot of customizing on the vehicle but still with some restrictions.”

Wade points out that it doesn’t cost a fire department anything to register with H-GAC, and that approximately 10 percent of E-ONE’s customers purchase apparatus that way. Other states have similar purchasing contract arrangements, he adds, such as State Term Schedule (STS) in Ohio and Costars in Pennsylvania.

Larry Daniels, E-ONE’s Southeast region director, says the Florida Sheriff’s Association offers multiple award bidding similar to H-GAC. “The Florida Sheriff’s has a base specification that you build the truck off of and then add options as desired,” Daniels says. “It has about 18 specs, level 1 and 2 pumpers separated by medium and big-block motors; platforms and ladders, both midmount and rear-mount; rescues; brush trucks; and even ambulances.”

Instead of tagging onto a large scheduled contract, the other type of tagging on is to a successful competitive bid of another entity, Daniels points out. “I don’t see any disadvantages to doing a tag-on. It allows you to select the product you want with a high level of confidence, and you know you’re getting a good deal and are still able to customize the vehicle to meet your needs.”

Donley Frederickson, national sales manager for Rosenbauer, says his company’s dealers are the ones who usually are the source of a tag-on sale, but typically it is the fire department making the request. “We work a lot with H-GAC and are seeing it as a growing area of purchases,” Frederickson says, “especially among county fire agencies and larger fire departments.”

Bill Miles, chief of the Silverton (OR) Fire District, started out with the idea of leasing a new pumper because his fire district had leased tenders (tankers) in the past. He has a district of 106 square miles with five stations staffed by seven paid and 65 volunteer firefighters running six front-line pumpers. The department ultimately tagged onto a KME order. “We ended up tagging onto Toledo (OR) specs for a pumper with the same chassis and six-person custom cab, Cummins 450-hp ISL9 engine, Allison 3000 EVS transmission, Hale 1,500-gallon-per-minute (gpm) QMAX150 pump, and UPF 1,000-gallon Poly water tank. The main difference was the option we added, a Darley Kubota pump and Elkhart Sidewinder bumper turret so we could operate on pump and roll,” Miles says.

At the Mason County (WA) Fire District No. 6, covering 11 square miles from two stations with three paid and 25 volunteer firefighters staffing three pumpers, Chief Clint Volk found the need to replace both a pumper and tanker at the same time. “We went to our citizens and got approval for the two vehicles, developed our own specs, and invited in multiple bidders,” Volk says. “We were looking to do interlocal purchasing supported by the state so we didn’t have to bid publicly, and each vendor had a contract we could jump on through interlocal purchasing.”

Assistant Chief Todd Ward says Mason County Fire tagged onto a KME contract with the Vancouver (WA) Fire Department, which had bid out three custom pumpers. “We were allowed options up to 20 percent of their purchase price,” Ward says. “The pumper has a 1,500-gpm pump, 1,000-gallon water tank, and four-door cab with an EMS compartment, but we changed a few things. We have through-the-tank ladder storage, roll-up doors, slide-out trays, and a three-bottle SCBA fill station and plan on carrying water, rope rescue, and extrication equipment on it.”

The department also tagged on for the tanker on a four-door International chassis and cab, with a 1,000-gpm pump, a 2,500-gallon water tank, two preconnects, ladders, and a collapsible water tank on the curb side.

ALAN M. PETRILLO is a Tucson, Arizona-based freelance writer and is a member of the Fire Apparatus & Emergency Equipment editorial advisory board. He served 22 years with the Verdoy (NY) Fire Department, including in the position of chief. 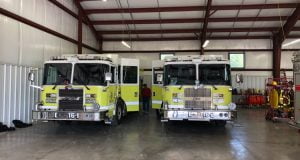 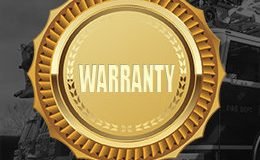 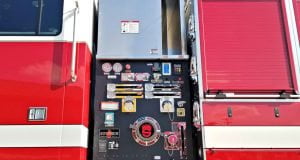 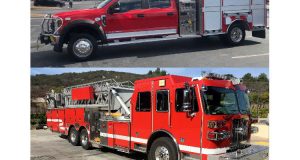 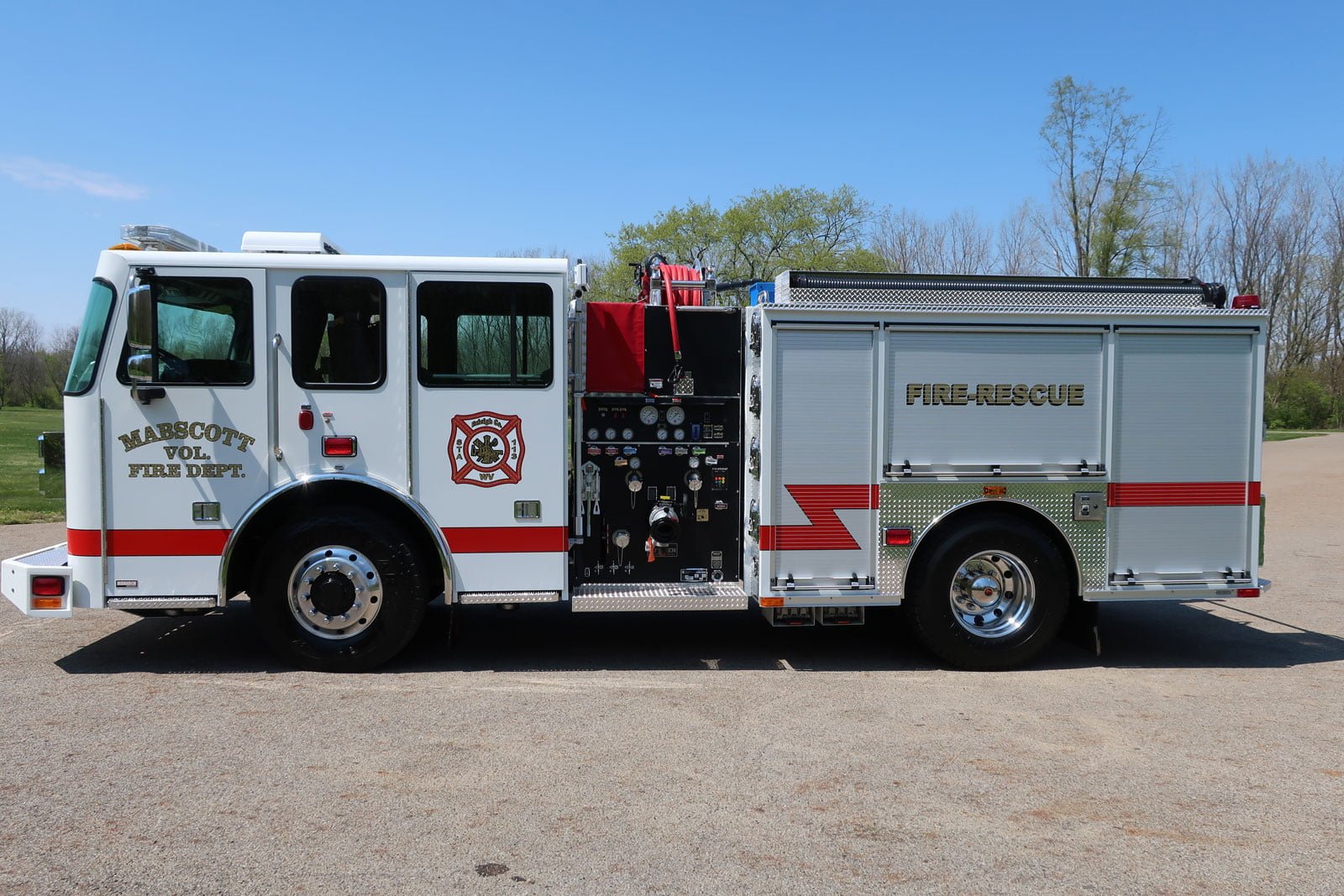