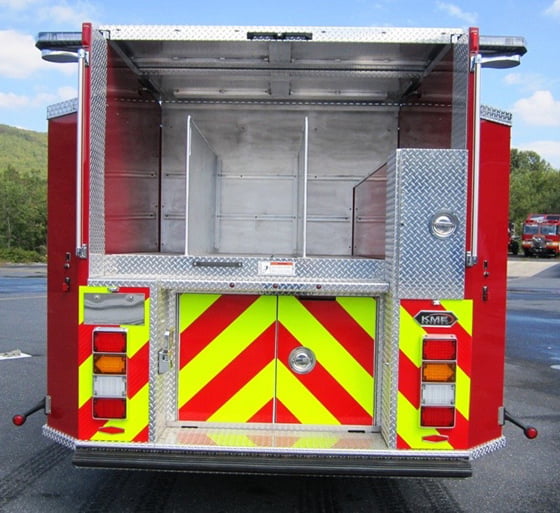 An example of extruded dividers on the supply line bed to give those some rigidity and strength from Clearwater, FL.

In Mechanicsville, MD, the department came up with rounding the back of the divider off so it would be easier to reach from the top and for the person controlling the folds to reach in to assist in packing. It then had the manufacturer cut notches at one quarter and three quarters in the hosebed divider, making it easier for the members packing the hose to reach in and firmly pack the hose down.

Anotehr view of the Mechanicsville, MD, rig with notches at one quarter and three quarters in the hosebed divider.

An example of fasteners at the top of the divider from Harrisburg, PA.

I believe it should go without saying that I am a huge proponent of low hosebeds, regardless of tank size or apparatus design. Low hosebeds assist in attack line deployment and help reduce firefighter injuries. But, departments have to know some of the problems that can occur when you just specify a low hosebed. Remember that we still require some compartment space. We still have to carry the water somewhere, which is usually in an “L” shaped tank, thus driving the water toward the pump and high up in the rig. When doing all of this, it can cause low hosebeds to have high side sheets and high hosebed dividers.

High hosebed dividers can become a problem when racking hose on the apparatus. The height from the lowest edge of a low hosebed to the top of the divider is daunting on some apparatus. Once we deploy either an attack line or the supply line, we have to rack it back on. Trying to pack the hose nice, straight, and tight can become difficult as reaching down in the bed can be beyond an outstretched arm. I have seen companies that actually have to use pieces of wood to push the hose down in the middle of the bed and at the front end of the hosebed. If you do not regularly deploy hose, this procedure can become problematic and cumbersome.

Two departments that I know and have visited came up with a solution for some of these hose racking problems. The first is in Mechanicsville, Maryland. The department there recently bought a rig and, to compensate for the tall hosebed dividers, it asked the manufacturer for some help. The department came up with rounding the back of the divider off so it would be easier to reach from the top and for the person controlling the folds to reach in to assist in packing. It then had the manufacturer cut notches at one quarter and three quarters in the hosebed divider, making it easier for the members packing the hose to reach in and firmly pack the hose down. 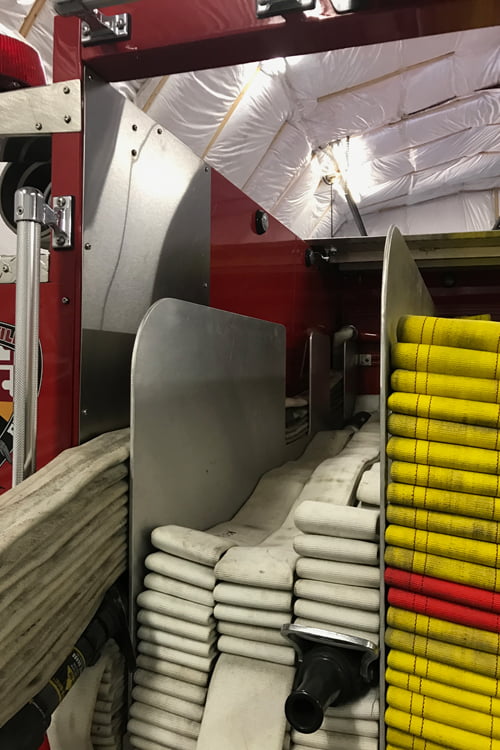 At the Kentland (MD) Volunteer Fire Department, members took the manufacturer’s dividers stock from the factory. Upon arriving back at their station, they racked all the hose for the rear hosebed. They then measured a safe height for the divider, accounting for the chance of air being trapped in the hose. Then they took all the hose back off and sent the marked dividers to its local fabrication shop and had it modify the height for the exact height needed—all based on the hoseloads and quantity of hose. This helped with both attack line and supply line re-packing, as members did not have to use pieces of wood to rack the hose. And, they were no longer reaching in with outstretched arms to pack the hose.

With tall dividers on low hosebeds, we also have to worry about the weight of the hose and hose shifting during driving and responses and pushing out the dividers. Originally departments would use a single sheet of aluminum or steel and weld on an extrusion to add strength. These extrusions can help solve the problem of pushing out of the dividers but can also cause a problem with couplings hanging up on the edge of the extrusion, especially when using them in the attack line dividers. One of the things we did in Clearwater, Florida, was use the extruded dividers on the supply line bed to give those some rigidity and strength. We then used just the single sheet divider with no extrusion for the attack lines. Another method to combat this problem is to add fasteners at the top of the divider. The Harrisburg (PA) Bureau of Fire did this on its new Wagon 4, and it works rather well.

As I said at the beginning of this article, a low hosebed is my choice for the rigs I have been involved with. The hosebeds were designed for operational needs and for the safety of our firefighters. But, I wanted to point out a few things that I believe departments might want to look at as they design these highly functional low hosebeds.

As always thank you for reading The Rig.

RICKY RILEY is the fire apparatus manager for the Prince George’s County (MD) Fire/EMS Department. He previously served as the Operations Chief for Clearwater (FL) Fire and Rescue, and as a firefighter for Fairfax County (VA) Fire & Rescue. He also currently serves as the rescue-engine captain at the Kentland (MD) Volunteer Fire Department. He is a member of the editorial advisory board of Fire Apparatus & Emergency Equipment.