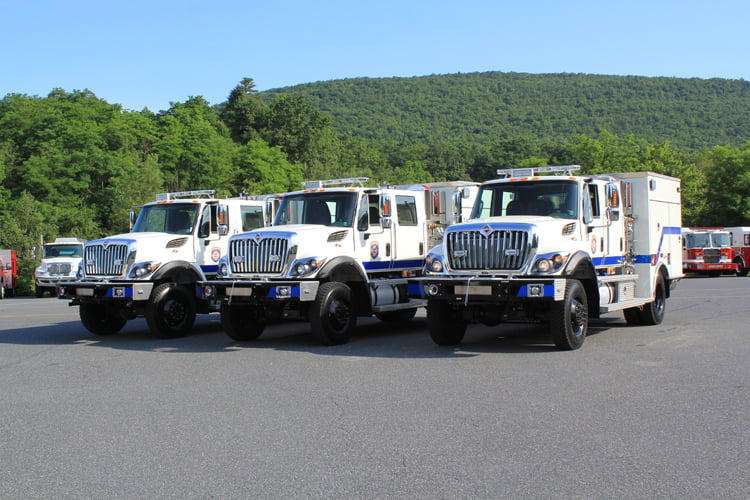 The Colorado rigs built by KME are on an International 7400 4×4 4-door chassis and cab, with a 183-inch wheelbase, powered by a 330-horsepower Navistar diesel engine, and an Allison 300 EVS automatic transmission.

The Colorado Division of Fire Prevention & Control is a state agency that has nine wildland engines housed around the state, serving in support roles to local governments when they need assistance. The Division was looking to replace a number of its Type 4 engines that carry 740 gallons of water, but wanted to buy Type 3 engines that could haul more than the typical 500 gallons of water.

Phillip Daniels, deputy chief of the Division’s Wildland Fire Management Section, says, “A Type 3 engine has a decent size water tank and can carry a lot of equipment, but we wanted a bigger water tank, so we came up with a hybrid Type 3 that has a 600 gallon tank capacity, but still is on a decent size wheelbase.” Daniels notes that the Division considered trying for a 750 gallon water tank, but opted for the 600 gallon size “because the larger tank would stretch the truck out more and make it have a taller height.”

Roy Cobb, direct salesman at KME, says KME got the contract for the five wildland engines, which it built on a modified version of the CALFire Model 34 Type three wildland rig. “The main difference in the Colorado engines is that we used an integral water tank that is part of the subframe of the truck,” Cobb says. “The advantages of an integral tank over a copolymer bolted-on tank design is that the truck can have a shorter wheelbase, a lower center of gravity, a lower and larger hosebed, and more compartment space. The lower the center of gravity on the engine, the safer it is, and the shorter wheelbase makes it easier to maneuver.”

The Division purchased five identical engines, Cobb points out, at a cost of $330,393 each. The engines are built on an International 7400 4×4 four-door chassis and cab, with a 99-inch-wide interface body constructed of 12-gauge Galvanneal steel, powered by a 330-hp Navistar diesel engine, and an Allison 3000 EVS automatic transmission. 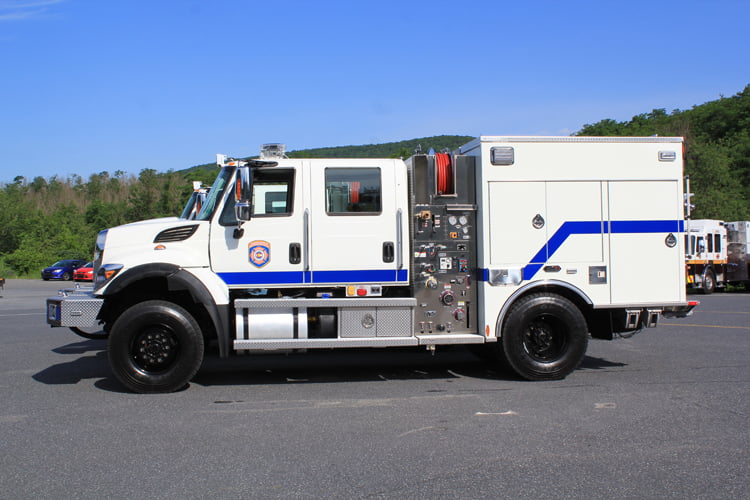 Daniels says the Division didn’t want a bumper turret on the rig’s 20-inch extended front bumper because he believes such monitors waste too much water on wildland fires. “We had KME build in a center storage well to hold 25 feet of 1½-inch hoseline where we can have a firefighter on the ground controlling the nozzle and adjusting the pattern and flow rate better than you can do from a monitor controlled from the cab,” he notes.

The engines each have two 200-foot 1½-inch crosslays midship, a Hannay aluminum Super Booster electric rewind reel at the rear with 150 feet of ¾-inch hose, and a hosebed set up for 600 feet of three-inch supply line, as well as multiple hose packs holding a total of 2,000 feet of 1½-inch hoseline. The rigs also have aluminum tread plate hosebed and crosslay covers.

Doug Kelley, product manager for KME, says the biggest challenges in building the engines “was keeping the overall hosebed height and preconnect height as low as possible and also getting 600 gallons of water on them without increasing the wheelbase or overall height. We went with the integral stainless steel tank that takes up less space because it is part of the body, and that helped keep the hosebed height down.”

Cobb points out that an unusual feature on the wildland engines is that they have a spare tire carrier tucked under the rear body compartment and accessed by a winch. “Because the firefighters often spend a lot of time in the rig traveling to a fire, we were very conscious about how we set up the interior of the truck,” he adds. “We put in air ride seats for every firefighter, as well as USB ports at every seat.”

Colorado’s state fire management program was put under the Division of Fire Prevention & Control in 2012, Daniels says, and the Division now has multiple air tankers, nine engines, two helitac crews of 10 firefighters each, and four hand crews of 20 firefighters each (three from the Department of Corrections and one of state employees, veterans, and seasonal firefighters).

“We provide initial attack and support services to anyone who needs it in the state,” Daniels says, “and also fill the niche where local jurisdiction doesn’t have any aviation assets. “We staff our engines in a joint staffing model with communities where we staff three firefighters on the engine and the community staffs the fourth. It’s a good joint process and effort where they get good service and we are able to assist in areas that need the help.”