Roland Balderas, Sheldon’s assistant chief administrator, says Sheldon has been using Darley apparatus, pumps and other equipment for a number of years, so when the department decided to replace several engines, it turned to Darley to get the rigs it wanted built. “We consulted several manufacturers, and one of them quoted a two-year build time to get what we wanted,” says Balderas, “but Darley told us they could get it done right away.” Balderas notes that the area has a history of bad hurricanes and tropical storms with localized flooding conditions. “In 2017 during Hurricane Harvey, the area got 60 inches of rain and we saw water up to our bays at Station 1,” he observes. 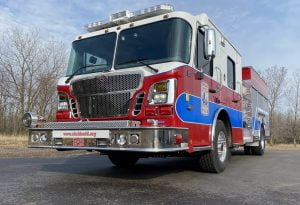 Sheldon’s truck committee went to Darley and specked four identical pumpers that could be driven through moderate flood waters. Neal Brooks, Darley’s national sales manager for the apparatus division, says Sheldon had been using a refurbished military 6×6 truck to rescue people from flooded areas, but wanted a high-water transit ability for its front-line engines. “This is a forward-looking fire department that wanted to get things set for the next flooding emergency where they might need to go through standing water,” Brooks points out. He notes that the challenges Darley faced include moving the air intake for the engine, relocating the exhaust system, and waterproofing all electrical components.

“We moved the engine air intake to slightly below the level of the windshield,” Brooks says. “With the exhaust system, we went with a vertical exhaust that has a special containment device between the cab and the pump module to shed heat from the exhaust pipe. And we waterproofed all the vehicle’s electrical components. Even the fuel tank vents had to be raised to prevent water contamination. Now, if they have an emergency where they need to go through standing water, they can do it, as long as the water doesn’t exceed the height of the top of the rim of the tires.” 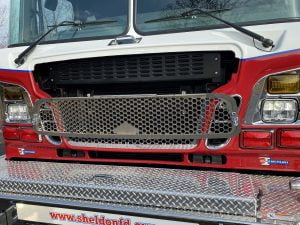 In order to allow the engines to operate in flood water conditions, the motor’s air intake was raised to slightly below the level of the windshield.

Brooks notes that each of the four rigs is built on a Spartan Gladiator ELFD chassis and cab with a polypropylene body, powered by a 450-horsepower (hp) Cummins L9 diesel engine, and an Allison 3000 EVS automatic transmission. Wheelbase on each engine is 212 inches, overall length is 34 feet 3-3/4-inches, and overall height is 10 feet 1-1/2-inches, while the front axle is rated at 20,000 pounds, and the rear at 27,000 pounds. The rigs have a Darley LDMBC compressed air foam system (CAFS)-enabled 1,750-gallons per minute (gpm) pump, a 1,000-gallon water tank, 30-gallon foam cell, and a 220-cubic-feet-per-minute (cfm) air compressor.

He says the engines have the Vision series pump panel that features a graphic composition of all the nomenclature, discharges and labels built into it. “It’s a composite material that has the information printed onto it that’s made for severe duty by being weatherproof and resisting direct sunlight to make it functional and easy to read,” Brooks says. “The engine’s speed lays are in removable trays in a three stack in front of the pump panel, that make it easy to reload hoses after an incident.” 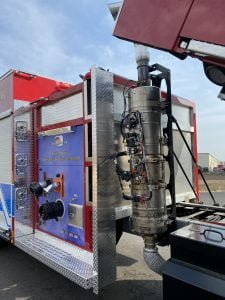 Darley installed a vertical exhaust stack on the engines in a special containment device between the cab and pump module to shed heat from the exhaust pipe.

Balderas notes that having CAFS is an important element on the four pumpers. “All our current engines have CAFS, so we wanted to continue it on our new pumpers,” he says. “Our two 1-3/4-inch and one 2-1/2-inch speed lays can flow CAFS or plain water, as can the 100-foot 1-3/4-inch hose line in the front bumper.” Balderas adds that the cabs of the new engines are clean cab concept cabs, with each pumper carrying a second set of turnout gear in the dunnage area for the four-firefighter crew. An EMS (emergency medical services) compartment, accessible from inside and out, takes up the space of rear-facing seating in the cab. “We have the self-contained breathing apparatus (SCBA) air packs mounted on a slide-out tray on the driver’s side of each pumper,” he says. 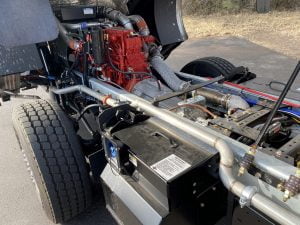 The transmission vent and the fuel tank vents had to be raised in order to prevent water contamination. 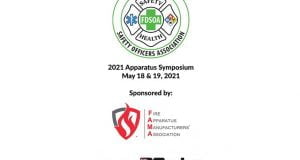 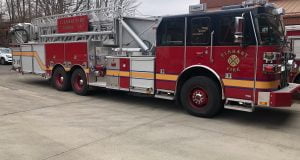