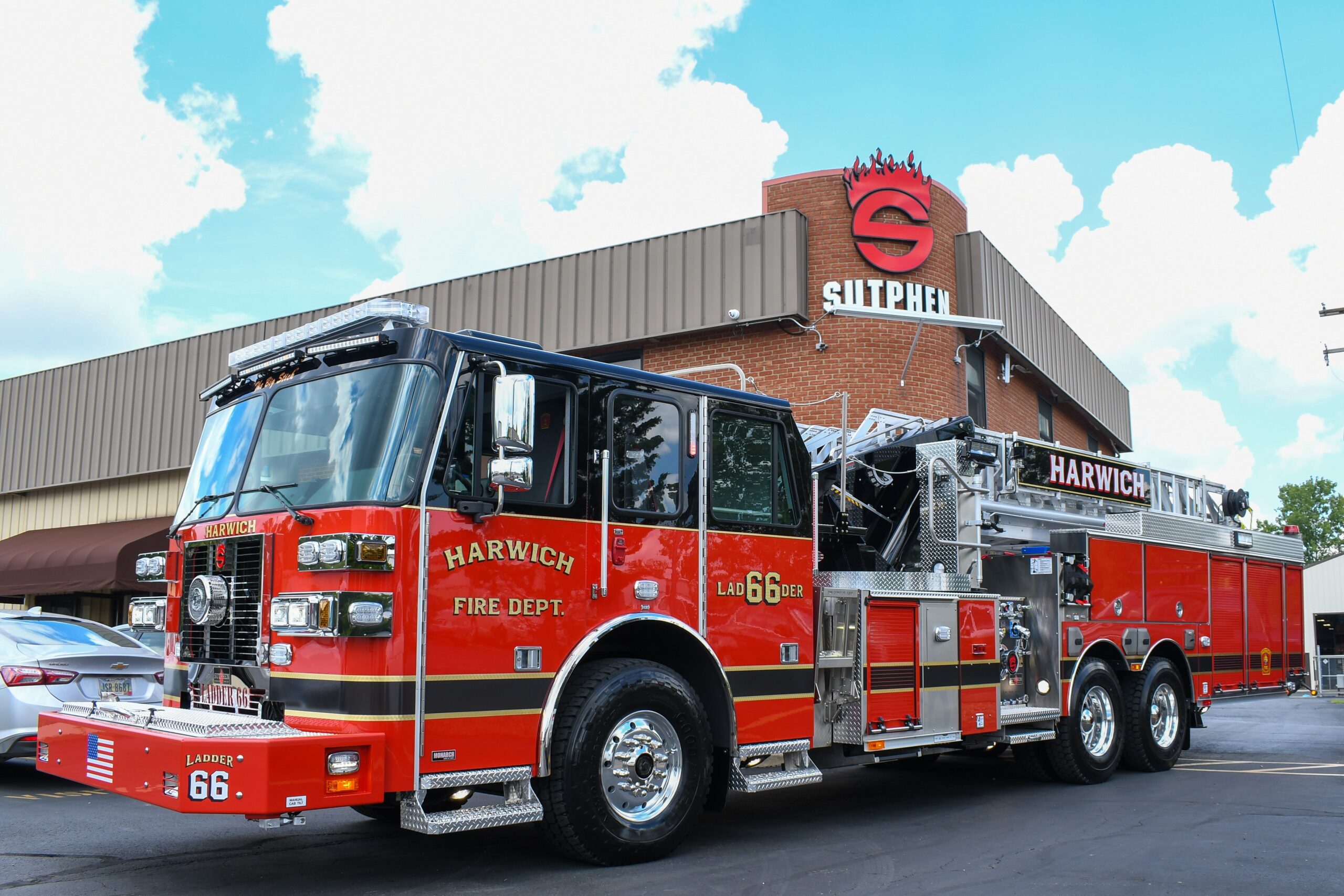 Dave LeBlanc, Harwich’s chief, says the department’s capital plan called for an engine and an aerial replacement five years apart, but with the COVID pandemic and some maintenance issues with the aerial, the department decided to fold the two purchases into a single unit that could perform both functions.

LeBlanc points out that Harwich’s 13,000 year-round population, which triples in the summer months, is contained in the 20-square mile city that’s protected by 36 full-time paid firefighter/EMTs (emergency medical technicians), with half of them being paramedics, working out of two stations. “We run four engines, one ladder, a forestry truck, four ALS (advanced life support ambulances), and utility vehicles,” he said. “We have five firefighters on duty 24/7 at our headquarters station and three at Station 2.”

Zack Rudy, Sutphen’s director of sales, said the Harwich SL 100 is built on a Monarch heavy duty custom chassis with a 56-inch extended flat-roof four-door cab having seating for four firefighters, and a Huckbolted 304 stainless steel body. The front axle and suspension is rated for 23,000 pounds, while the tandem rear axle and suspension is rated for 48,000 pounds. The rig is powered by a 455-horsepower (hp) Cummins X 12 diesel engine, and an Allison Gen 5 4000 EVS automatic transmission, with a 420-amp Leece Neville alternator, and has a 110-foot aerial ladder with an Akron Brass Company StreamMaster II monitor with a Stream Shaper and Task Force Tips (TFT) stacked tips.

LeBlanc points out that the SL 100 aerial quint has a Hale QMax 2,000-gallon per minute (gpm) pump, and a 450-gallon water tank. “We wanted a bigger water tank on our quint than is typical,” he said. “I would have liked to get 500 gallons of water on it, but that would have put a dent in the amount of hose we could carry in our hose bed and also could affect our ground ladder complement, so we reduced it to 450 gallons.”

He notes that Harwich went with a small pump module and small cab on the aerial quint to keep the wheelbase down to 230 inches. The rig has two cross lays of 200 feet of 1-3/4-inch hose each, and 200 feet of 1-3/4-inch hose in the 24-inch extended front bumper, all tipped by smoothbore nozzles. “We have 1,000 feet of 4-inch LDH (large diameter hose) in the hose bed, a trough for 300 feet of 3-inch hose, and another for 300-feet of 2-1/2-inch hose connected to a TFT Blitzfire nozzle.,” LeBlanc says.

LeBlanc notes that the SL 100 aerial has Amdor roll-up doors over the 190-cubic feet of compartments on the rig, and carries a Duo-Safety ground ladder complement of a 35-foot, three-section extension ladder and a 10-foot folding ladder in an enclosed compartment; and two 28-foot two-section extension ladders, two 18-foot roof ladders, and one 16-foot roof ladder in a ladder rack on the right side of the rig; and a 14-foot roof section on the aerial ladder’s base section.

Harwich also has two Sutphen engines in its fleet, LeBlanc points out, built in 2012 and 2014. “They both carry Amkus battery-powered hydraulic rescue tools on them, as well as air bags and struts on one engine,” he said. “We have a countywide technical rescue team and a dive team, so we don’t need to carry that equipment, and have basic water rescue equipment on our engines. So the aerial quint is set up to function as a truck and a pumper, depending on the circumstances. We especially like how easily it sets up as a truck, with two H-style jacks in the middle of the truck, and two stab jacks at the rear.”

The Harwich (MA) Fire Department has taken delivery on a new Sutphen SL 100 aerial ladder quint that replaces an engine and an aerial ladder.
 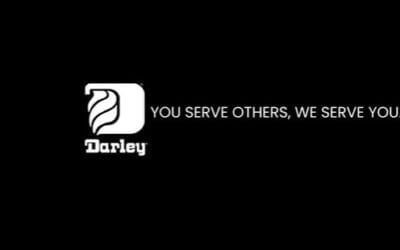 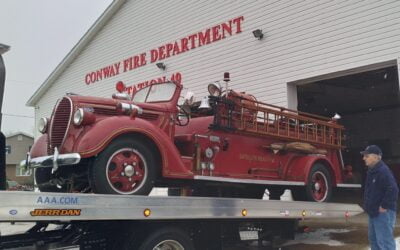 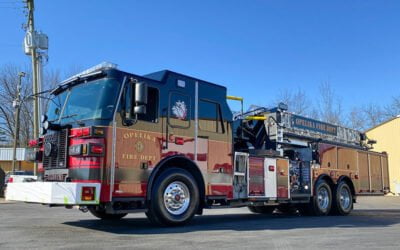