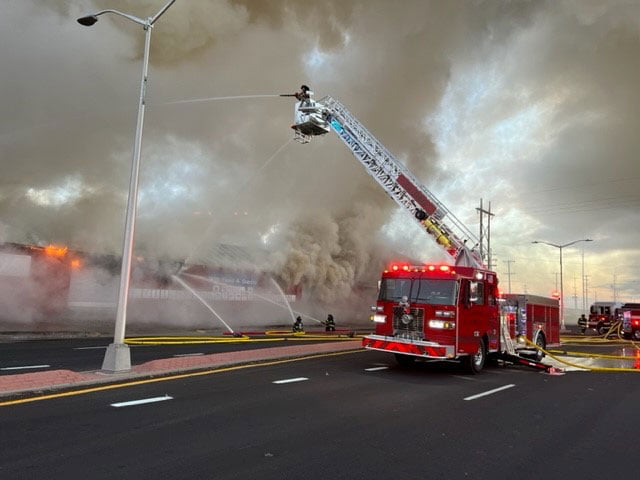 Davidson points out that the quint has two 200-foot 1-3/4-inch hose cross lays with smoothbore nozzles above the pump, 150-feet of 1-1/2-inch double jacket hose in a hose well in the extended front bumper, and 200-feet of 2-1/2-inch hose preconnected to the upper left side discharge. At the platform, the quint carries two Akron Brass Company 3470 Gemini manual monitors, one with an Akron Brass 1,250-gpm Akromatic nozzle, and the other with Akron Brass quad stacked tips and a stream shaper.

Davidson notes that the rig’s hose bed carries 1,100 feet of 5-inch large diameter hose, and 600-feet of 2-1/2-inch hose. “We are fortunate to have hydrants and a good water supply in the three towns in our fire district,” he observes, “but in the rural areas, we rely on shuttling water in our two 1,800-gallon tenders (tankers), and other engines.”

Davidson says La Junta made the change from a straight stick to a platform for two main reasons. “The first is that it’s safer for our staff to work out of a bucket,” he notes, “and the second is that it’s easier to make a rescue from a platform, where you can get a victim into the platform much quicker and easier than have them climb down a ladder.

The chief adds that with a lot of tight streets in La Junta’s fire district, the department has found that the vehicle’s lower center of gravity, lower profile, and greater stability gives them greater maneuverability and usability with the truck. He says the rig’s 192-cubic feet of compartment space is covered by ROM roll-up doors, and that it has an Alco-Lite 35-foot three-section extension ladder, a 24-foot two section extension ladder, a 16-foot roof ladder, and a 10-foot folding ladder.

Zach Rudy, Sutphen’s director of sales and marketing, says, “We want to thank the La Junta Fire Department and Chief Brad Davidson for their trust in the Sutphen product and Sutphen family. This SP 70 is La Junta’s first Sutphen apparatus, and we are honored to be a part of the La Junta, Colorado, community.”

See also  The Rig: Is the Side Suction the Answer?