The presumption in this article is that a purchaser is soliciting competitive bids to purchase a fire truck via a public bid opening. The idealistic supposition is the purchasing specifications reflect a minimum acceptable level of design and construction without being overly restrictive to possible bidders. It is immaterial who wrote, or helped to write, the purchasing specifications. They belong to the fire department that may have to defend its content in a public forum—whether it be a prebid conference or at the political subdivision’s formal bid opening.

0.88 Inches Deep
It is very common today to see an equipment compartment’s depth specified with the decimal 0.88 of an inch at the end. An example: “The compartment ahead of the rear wheels on the driver’s side shall be 27.88-inches deep.” It is probably one of the most definitive measurements found in the fire apparatus industry.

The words “shall be” in the sentence indicates the purchaser does not want a compartment depth “less than” or “more than” or “approximately” that measurement. The purchaser wants that exact compartment. There’s no wriggle room. It is or it isn’t.

Reinforcing the purchaser’s expectation of bidder compliance, many times the specifications will have a statement similar to: “Because all custom manufacturers have the capability to bend, form, and shape metal, NO EXCEPTIONS will be allowed for the specified compartment dimensions.” Simply put, the purchaser is saying if you can’t build to those exact dimensions, don’t bother bidding.

Disclaimer?
Often found, and usually buried in a set of purchasing specifications, is a statement alluding to the fact there is an allowable tolerance for measurements! The statement is similar to those found on proposal blue prints: “Dimensions shown are approximate and are subject to minor deviations as may occur or be necessary in construction.” Who determines what a minor deviation is? How much is it?

It seems irrational that a purchaser’s specification would emphatically state a dimension shall be 27.88 inches or 27.20 inches in one place while allowing a tolerance of perhaps ¼ of an inch in another. It would be interesting to hear the fire chief explain that to the mayor if challenged by an unsuccessful bidder.

Accuracy Required?
There are circumstances where measurements can be absolute for obvious reasons. They could, however, be stipulated as a maximum or as a “not to exceed” figure. One example is: “The overall height of the completed apparatus in its unladen condition (no water, no hose, no equipment) shall not exceed 116.50 inches.” Others could be in stating a rig’s maximum overall width and length. It is obvious all three can be justified to ensure the apparatus fits inside and gets outside of the fire station when unloaded.

Another scenario justifying precise dimensions includes compartments that are mission-specific—they have to hold certain equipment. Those dimensions could also be specified as “no less than,” or a performance specification without dimensions can be written. Use caution when specifying dimensions for compartment door openings. Some manufacturers’ interpretation of a compartment’s clear door opening may not include the door pans for hinged doors or the shutter rolls, drip pans, hardware, and seals for roll-up doors. They may consider it just a door frame to door frame measurement. Ask.

Hidden Agenda?
If the real intent of writing what could be considered proprietary dimensions is to ensure the success of a preferred vendor, then so be it. Just bear in mind that the decision to write such a specification may have to be justified in a public forum. Although somewhat defensible as alluded to earlier about any custom manufacturer being able build to any dimensional requirement, it is not feasible, reasonable, or fair to ask the Ford dealer to build a Cadillac. The Ford dealer might, for good reason, laugh you out of the showroom. Good luck. 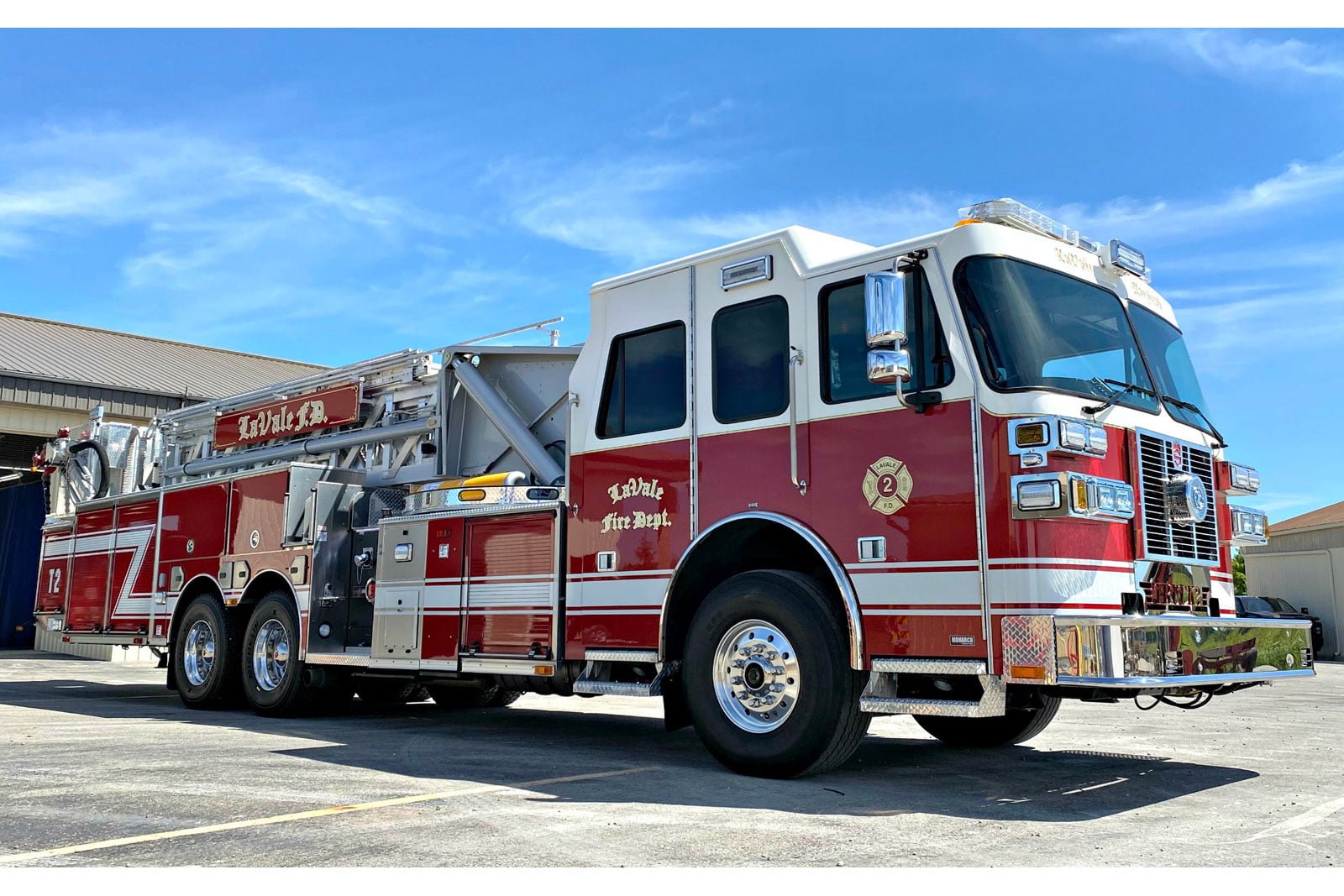 Sutphen built this SPH 100 aerial platform quint for the LaVale (MD) Fire Department. The rig is powered by a Cummins 500-hp X12 engine and an Allison Gen 5 4000 EVS automatic transmission.