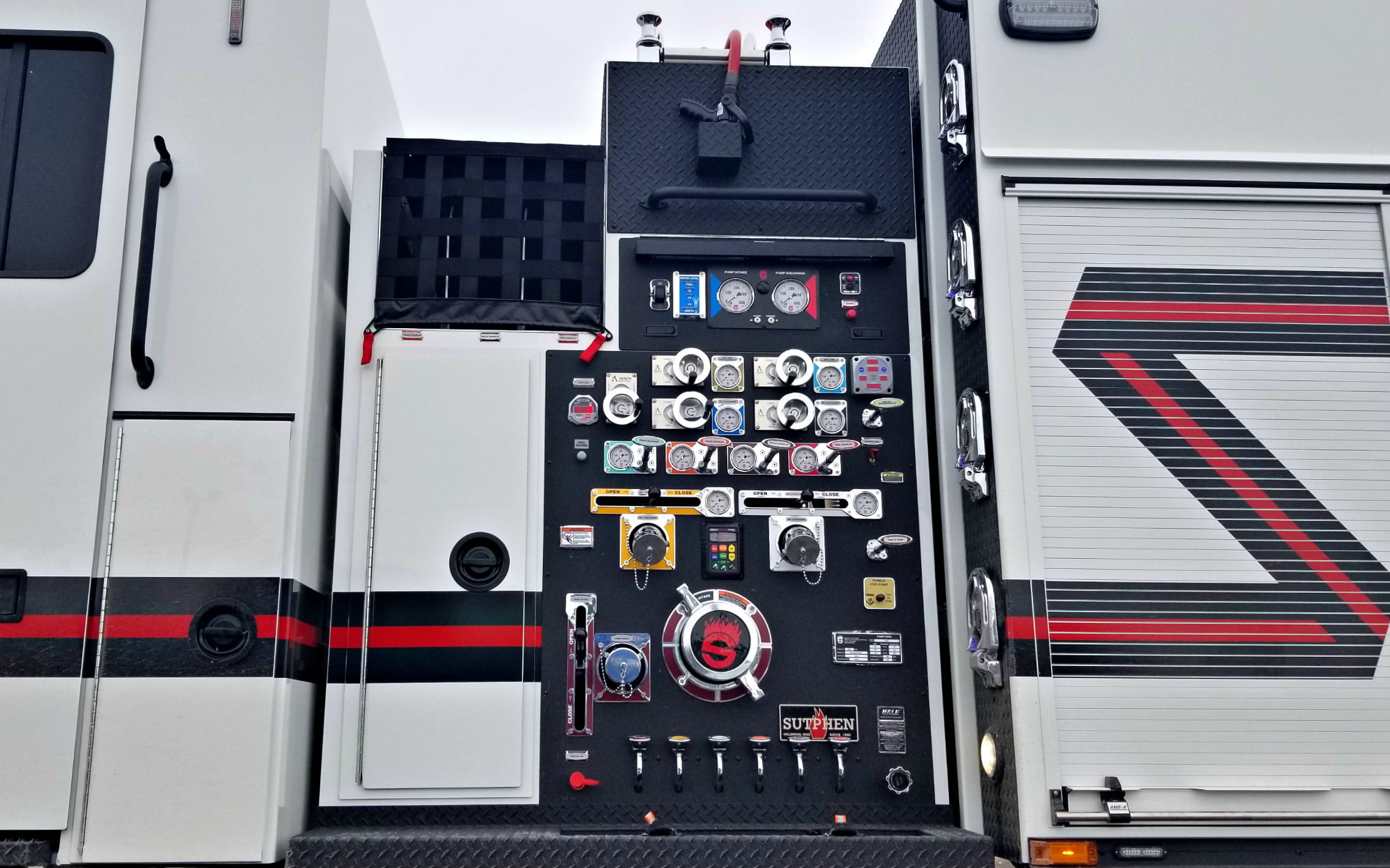 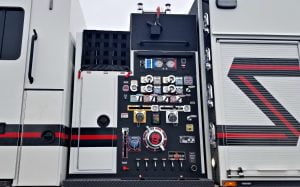 A unique midship pump house with an integral compartment in the forward section and three recessed crosslays above it. The crosslays are part of the pump house structure and not an “add on” mounted above it. (Photos 1 thru 4 courtesy of Sutphen Corporation)

Transverse hose storage for handlines has been around since the late 1940s. Commonly called crosslays and mattydales, they’re usually located immediately above or recessed into the top of a midship-mounted pump enclosure. Some are found on front bumper extensions and on the rear step–also known as the tailboard or more politically correct as the rear work platform. They all feature the principle of deploying the hose from either side of the rig. All are loaded from the top. It is irrelevant if the hose is preconnected. What is important is ensuring the intended hose fits, it is stored at a workable height, and can be deployed as intended. Adequate purchasing specifications will ensure so. 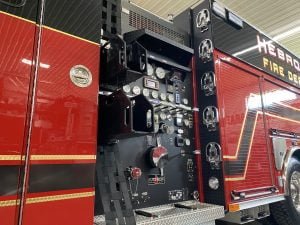 Two of the trays on three vertically stacked speedlays fabricated into the structure of the pump house.

Transverse hose storage called speedlays are found in two versions. Located in the transverse walkways of apparatus with top mount pump operator panels, some are mounted immediately in front of the pump house just below the operator’s panel. They also can be recessed into the pump house structure itself. Loading is from the walkway. Freestanding crosslays or a crosslay above a speedlay have been mounted in walkways just behind the cab. 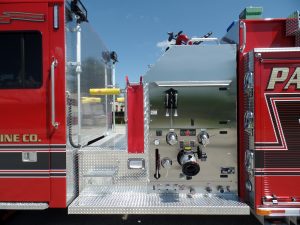 Vertical speedlays in the walkway of a top mount pumper.

Speedlays loaded in removable trays are common on apparatus with wide pump houses; on those without a traditional midship-mounted pump house, and in scenarios where the purchaser wants preconnected attack lines away from the pump operator’s position. A common configuration is two trays located side-by-side holding initial attack lines and a tray with a larger attack line located above them.

It is immaterial what transverse hose loads are called. As previously mentioned, it doesn’t matter if the hose is preconnected or if it is a dry lay. It is also irrelevant what diameter hose is used–although that is an important consideration when writing purchasing specifications. What is important is that the purchasing specifications accurately define exactly what is going to be carried; how it will be loaded; where it is located; and the intended method(s) of deployment. 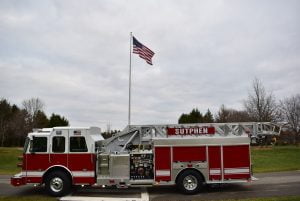 When purchasing a rig identical to one previously purchased–with the same crosslay specifications from the same manufacturer–there might not be a problem using ambiguous specifications. However, in competitive bidding environments where any manufacturer could be awarded the contract, all bidders–including the successful one–are only obligated to comply with whatever the purchaser specified in the document. What you write is what you get. Be definitive or live with the consequences.

A half dozen purchasing specifications from various manufacturers were randomly chosen off the internet. Following are some interesting findings regarding the verbiage specifying crosslay beds. 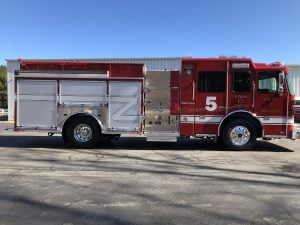 Three vertically stacked speedlays with removable trays on a pumper delivered to Brantford, CT. (Photos 5 thru 9 courtesy of Jim Lyons from Shipman’s Fire Equipment in Connecticut)

[Ed’s note: Underlining is mine for emphasis; my comments follow in italics.]

*Almost all specifications had verbiage similar to: “Each bed to be capable of carrying 200 feet of 1.75″ double jacketed hose.”

The verbiage does not specify if a nozzle will be carried in the bed on top of the hose lay. For single stacked lays, is the bed wide enough for the nozzle to pass through if the load is supposed to be deployable from both sides of the rig?

*Not one of the documents specified the actual dimensions of the hose beds.

Some apparatus manufacturers, dealers and vendors utilize “hose volume calculations” based on hose manufacturer’s specification sheets to determine the volume in cubic feet required to store a hose. It is a theoretical measurement. Caution: The lay flat widths of the same diameter hose can vary between hose manufacturers. The thickness of a single flay lay of hose can also differ depending on materials used and the type of hose construction. It is unknown if apparatus OEMs based their calculations on several hose manufacturers’ figures, or just one, or if their figures were developed in-house. 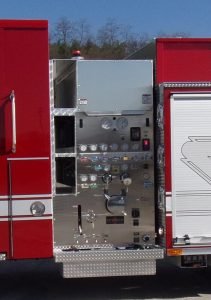 The driver’s side of the Brantford pumper sans the cover and trays.

Not knowing how the hose will be packed and deployed, and beds with identical measurements may make for a “sloppy” fit for the 1.75-inch hose and a “tight” fit for the 2.50-inch hose.

*Only one out of six documents specified the actual distance from ground level to the bottom of the bed(s).

This measurement will determine if firefighters at ground level can easily reach the hose load to deploy it. It also indicates how high a loaded tray must be lifted after its been reloaded. Five 50-foot lengths of 2.50-inch with a nozzle and a six-foot-long tray might be too heavy and cumbersome for a couple firefighters to lift over their heads and slide into the apparatus. 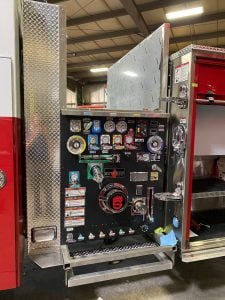 Crosslays on a midship pump house under construction.

*One document specified the crosslay was to be “lowered 8-inches from the standard.”

This is an attempt to specify a maximum height, however, “standard” transverse hose bed heights can vary from one apparatus manufacturer to another.

Can “approximately” mean 60 inches and 72 inches? Rarely mentioned is the height to the top of a crosslay–important to those departments who load hose with the nozzle resting on top of the bed. Can the tip be reached from ground level? 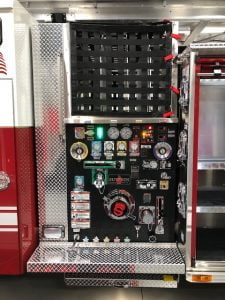 Four crosslays with dividers and netting in place.

*One interesting specification said: “Speedlay #1 shall be designed to have a minimum total capacity of 3.5 cubic feet as required by NFPA 1901 to accommodate a minimum of 250 feet of 1-3/4″ Brand xxxx fire hose and Brand xxxx pistol grip nozzle. The hose shall be loaded in a double stack configuration.”

This is a performance specification. The purchaser is saying how much of what manufacture hose is to be loaded in a double stack with the manufacture of the nozzle assumedly sitting on top of it. If it doesn’t fit upon delivery, the apparatus manufacturer has a problem. Another note–if the purchasing specification front sheets says in one place the rig shall be compliant to National Fire Protection Association NFPA 1901 Standard for Automotive Fire Apparatus it is not necessary to repeat that requirement throughout the document.

A 75-ft rear mount quint with the pump house depicted in Photos 7 and 8 delivered to Wallingford, CT.

Be aware when a blueprint of the proposed rig submitted with the bid package differs from the specification verbiage, in most instances the specification has preference. Ask before you sign the contract. A pre-bid conference with interested vendors is an invaluable tool when writing purchasing specifications.

Many rigs today are sold via advertising, photographs and videos. Many purchases are made through cooperative purchasing contracts where the scrutinization of specification verbiage is not as prevalent as in competitive public bidding. In such scenarios, apparatus purchasing committees may not be overly concerned with the technicalities of apparatus construction and specification writing. Whether it is because of the pandemic, ineptness or laziness is irrelevant.

“Hey–this rig looks sharp! Let’s buy it and bypass the hassle of writing specs and bidding.”  Good luck–hope it works for you when you get it home.

Transverse hose storage for handlines has been around since the late 1940s. Commonly called crosslays and mattydales, they’re usually located immediately above or recessed into the top of a midship-mounted pump enclosure. Some are found on front bumper extensions and on the rear step–also known as the tailboard or more politically correct as the rear work platform. They all feature the principle of deploying the hose from either side of the rig. All are loaded from the top. It is irrelevant if the hose is preconnected. What is important is ensuring the intended hose fits, it is stored at a workable height, and can be deployed as intended. Adequate purchasing specifications will ensure so.
