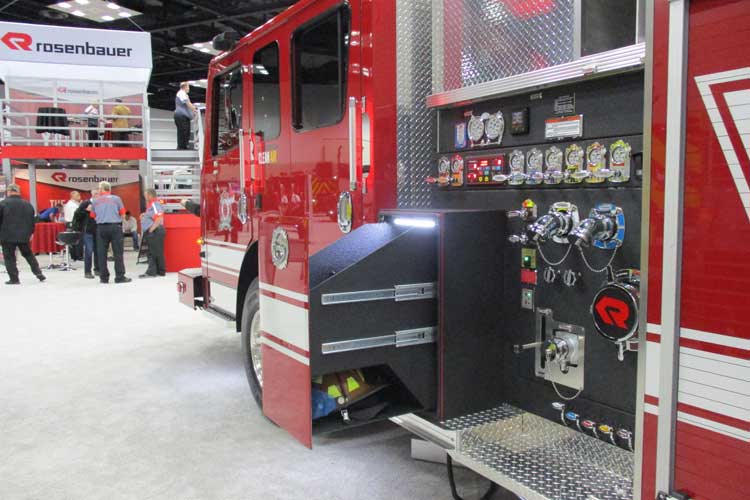 At the FDIC International 2019, several apparatus manufacturers addressed both physical and gaseous carcinogens in crew cabs. Noteworthy were introductions in compartmentation by both REV’s E-ONE and Rosenbauer-America. I am totally in favor of innovations, devices, and procedures that minimize harm to firefighters. Equally important is pointing out possible consequences in adopting them regardless of whether the ramifications are physical, operational, or emotional. Financial concerns are not broached. I will not place a value on firefighter safety.

E-ONE
E-ONE displayed one of several rigs for Miami-Dade (FL) Fire Rescue. Miami-Dade pursued this concept because of an incredibly high number of cancer-stricken active and retired firefighters. How they addressed it is best described in the following video:

Rosenbauer introduced its Clean Locker concept, which is an integral part of a redesigned traditional midship pump house. I asked Scott Oyen, CEO of the Rosenbauer South Dakota facility to briefly explain the design. “The Clean Locker is independent of the cab, so the size, make, model, and cab options such as compartments do not matter for the Clean Locker,” says Oyen. “You will need to use an end suction pump so we can customize the manifolds.” When asked if the rig’s wheelbase would be increased, he replied: “As long as we can use a pedestal-style pump where we make the intake and discharge manifolds there is no increase to the wheelbase. The goal was to have the same wheelbase as a standard pumper, and that was achieved.” 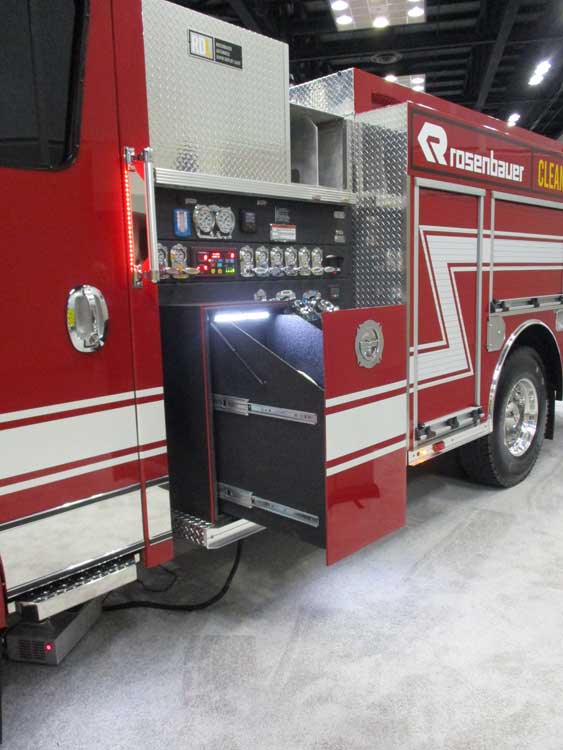 The driver’s side manually operated compartment (locker) in photos 1 and 2 holds about  seven cubic feet, and the passenger’s side power operated locker in photos 3 and 4 has a capacity of about 35 cubic feet. In regard to venting, Oyen commented, “Currently they are not vented but can be. We had a visit from a group from the Firefighter Cancer Support Network, and their structural expert suggested that we add a 12-volt vent to the clean locker. In his opinion, this addition would make the Clean Locker an NFPA-complaint PPE storage facility. This would meet the NFPA guidelines for storage in a building. We are planning on adding this 12-volt vent and adding a nonpowered vent in the manual tray on the driver’s side panel.” 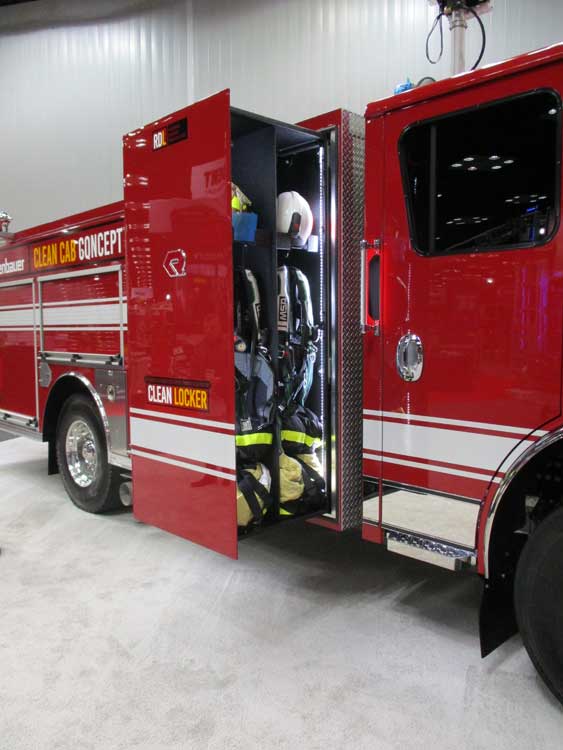 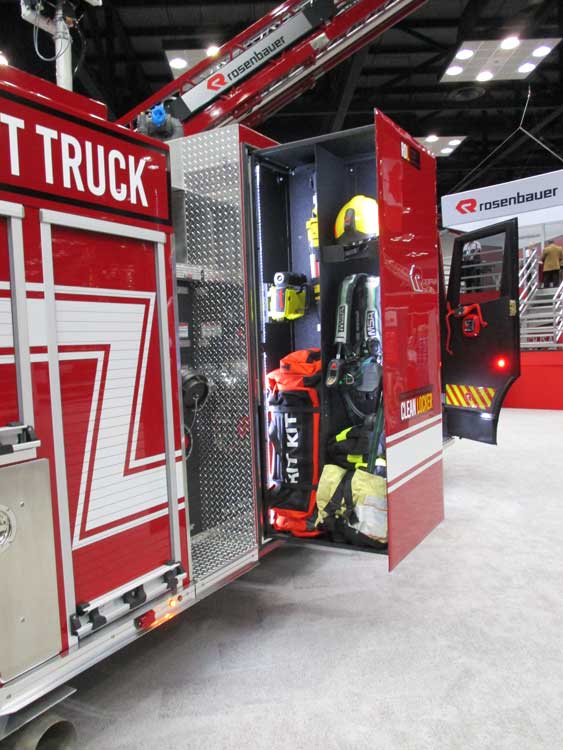 Operational Concerns
There is no attempt to disparage or lessen the attempt to eliminate carcinogens in a cab or negate the quest for an environmentally safe cab. There are, however, possible ramifications purchasers should be aware of. As mentioned, there is the possibility of losing seating capacity and increasing a rig’s overall length, wheelbase, and turning radius. Storage space must be found for equipment formerly carried in the crew cab and external cab compartments. There may be the possibility of external compartments extending into the cab area reducing the visibility looking outside the cab.

A pedestal pump may not always be suitable for every fireground pump operation. Shrunken pump panels may reduce access for pump service and the location of controls and hose connections. Departments that keep their clean gear outside the cab should consider how long it will take for firefighters to exit a cab and don full protective clothing after arrival. Consider doing so in inclement weather.

Another item that should be addressed is after a situation when contaminated gear is “boxed, bagged, and tagged” and secured outside the cab. What is the procedure if another alarm comes in when the rig is on its way back to quarters? Is the rig out of service until it returns to quarters and secures clean gear? And, who makes the determination as to the amount of or duration of exposure to possible carcinogens before gear is bagged-and-tagged? Although these possibilities may be irrelevant when dealing with firefighter safety, they should be evaluated and procedures established before rather than after the fact.

Emotional Concerns
Accepting the premise of an environmentally safe cab may be hard for fire service traditionalists to accept. The complaining will be similar to the wailing when firefighters were pulled off the rear step, forced to wear protective hoods, not wear ¾-length boots, and when roofs and doors were required on fire trucks. Precondition the known vocal and outspoken members.

You might have to address the public who are not used to watching six firefighters getting geared up after getting off the fire truck. They might relate it to arriving on time to pick up your date and finding out he or she is still in the shower. Beware of firefighters who may not fully gear up because of a potentially dangerous situation seen upon arrival. Firefighter safety is paramount, and training is the key.

By Bill Adams At the FDIC International 2019, several apparatus manufacturers addressed both physical and gaseous carcinogens in crew cabs. Noteworthy were introductions in compartmentation by both REV’s E-ONE and Rosenbauer-America. I am totally in favor of innovations, devices, and procedures that minimize harm to firefighters. Equally important is pointing out possible consequences in adopting […]
