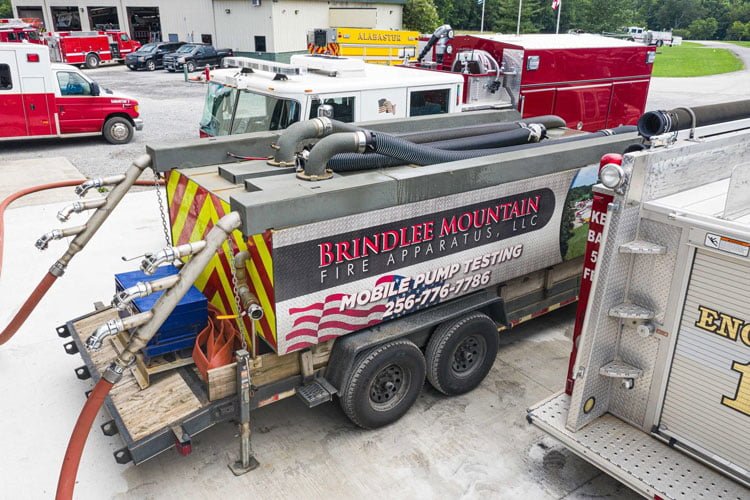 Brindlee Mountain works with and serves local fire departments by providing mobile pump testing. During one of these routine service calls, the technician learned the department had been searching for a used rescue truck for several years.

That was all it took to start a conversation with the Vestavia Hills (AL) Fire Department to help it find that needed rescue. The service technician quickly made a connection to the sales team and the journey to the right rescue truck was underway.

Brindlee salesperson Sam McMunn contacted the department and begin to lead it on a search to find the used fire truck that would meet its needs.

After an exhaustive search through the trucks on www.firetruckmall.com, they locked in what they thought might be the right fit for their needs a 2003 Pierce Saber Heavy Rescue However, it was still in service and in New Jersey.

No problem.
Sam, traveled with members of the Vestavia Hills team to New Jersey for an initial inspection. After the visit, the department was ready to commit to the truck but wanted one more inspection.

No problem.
As soon as the truck arrived at Brindlee Mountain from New Jersey, the Vestavia Hills team was on campus for the final ‘prepurchase’ inspection.

Yes, that was the truck they wanted and needed.

The deal was made.

After purchase. Brindlee technicians entered the process again, this time working on the desired upgrades Vestavia Hills had requested. After completing these items, the truck was delivered in April and is now in service.

See also  Guaranteed Money on a Buy Back

“It was an honor to have the opportunity to work with such a prestigious organization as the City of Vestavia Hills. I enjoyed having the opportunity to meet with their apparatus committee at their facility, travel to inspect the truck, as well as to facilitate the completion of this project and delivery of this apparatus to their department in April.” Sam McMunn

This is the first Vestavia Hills has purchased from Brindlee Mountain and we will work hard to make sure it is not the last.

A department needing to add a rescue truck to its fleet starts the search with a pump test.
