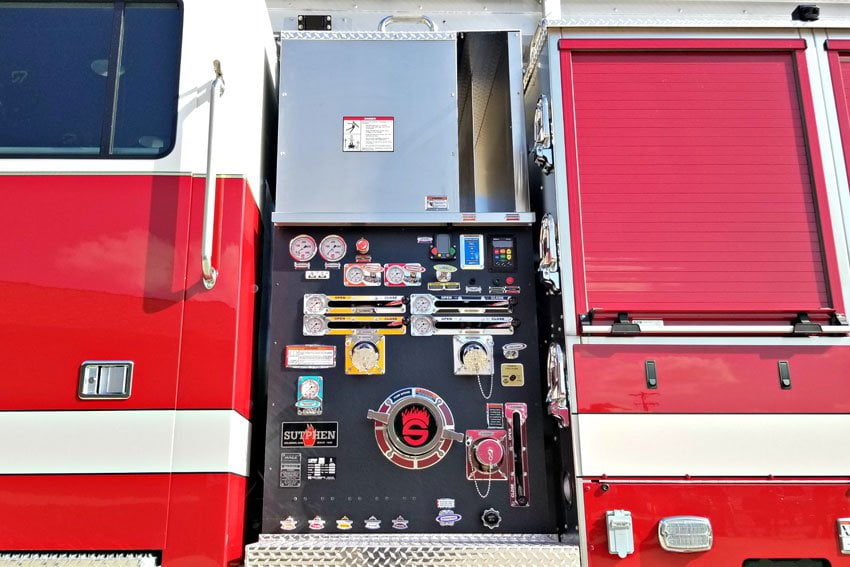 Pump pressure governors (engine governors) are very popular on today’s apparatus. There may be a propensity for some pump operators to engage the pressure governor preset button for a predetermined pump discharge pressure (PDP) and let the fire pump run on its own. Its immaterial if the practice is part of a department’s standard operating procedure or it is one of things that just happens. Judgement is not being made if the governor runs the pump or the pump operator does. That is a local decision. Whether to pump all preconnects at the same discharge pressure is also a local decision.

Letting a pump run on its own might be an unfortunate result of inadequate staffing where the pump operator may be obligated to stretch hose, throw ladders, perform ventilation, set up scene lighting, and perform other fireground tasks. It also could be the unintended consequence of historically responding to alarms where only a single line is actually used. Perhaps a backup line might be pulled but seldom, if ever, used. As long as the rig has an adequate water supply, and no one is screaming on the radio to raise or lower pump pressures, pump operators might let the pump do its own thing. Regardless of the reason, a lackadaisical attitude might develop that could be inherently dangerous on the fireground. You wouldn’t want an interior attack team making an aggressive push on a well-developed fire expecting to be flowing several hundred gallons per minute when in reality they’re only flowing a fraction of what is expected and actually needed. That could have tragic results. It is highly unlikely, although probably not impossible, that a single PDP is feasible in scenarios where various sizes (diameters) and lengths of preconnected hoselines are provided. It is worth investigating governors, nozzles, and preconnected hoselines to determine if a single PDP is workable or ill-advised.

See also  Are the Gates on the Apparatus Pump Panel Hard to Open and Close?  Then Clean Them Up!

Governors and Nozzles
The 1947 American La France Series 700 pumper operation manual described the company’s governor: “When operating a pump which has several discharge lines, it is necessary to have a governor to control the pressure as one or more lines are turned on or off. A control of engine speed is necessary to meet these conditions.” That sums it up rather nicely. A relief valve will not increase pump discharge pressure. A detailed description of governors and a comparison between them and pressure relief valves was done in 2007 by Dave Kelley (https://www.fireresearch.com/frcnews/archives/4). I make no comment on the governor/relief valve discussion. The original doctrine of automatic nozzles invented more than 50 years ago by Task Force Tips founder Clyde McMillian resulted in a very popular concept for interior firefighting. The theory was to pump 200-psi engine pressure into the line and let the nozzleman (my gender neutral term) control the flow. It worked well on TFT’s original 50- to 350-gpm Model HTFT automatic handline nozzles and is still a viable concept. There are some in the fire service today who favor low nozzle pressures for all nozzles regardless of whether they are automatics, fixed-gallonage, selectable-gallonage, or straight tips. And, the major nozzle manufacturers (Task Force Tips, Elkhart, and Akron) offer a multitude of products to meet the demand of what I call “high-volume and low-pressure” delivery systems. It is understandable the desire to safely get as much water as possible through a hoseline, especially through a preconnect that is probably the most common attack line used. There is no debate if the theory is good or bad nor will judgement be made on what’s the best type of nozzle. Let the manufacturers and end users duke that one out.

Preconnects
No disrespect is shown for departments that do not use preconnects. Many pull and break the length of hose line necessary. Likewise, others regularly and successfully lay fire to hydrant where they might use skid loads of attack hose supplied by a wye or a playpipe off their supply line (i.e. a “Detroit Bundle”). I venture that the majority of the attack lines used outside of congested urban areas are preconnected—regardless of size or length. An attack line is whatever you want it to be—1½-inch, 1¾-inch, 2-inch, or even 2¼-inch. It’s not uncommon to see a pumper with a multitude of preconnects. One fictitious engine company could have a 100-foot trash line, 150-foot and 250-foot attack lines, 150-foot and 250-foot 2½-inch backup lines, a 200-foot ground monitor preconnected with 2½-inch or 3-inch hose with 2½-inch couplings, and perhaps a second one with a gated wye. Some departments run multiple preconnects of the same length. To each his own.

What do you pump?
On that fictious engine company,y or even one with just a few preconnects, is it possible for a single preset pump discharge pressure to adequately deliver the flow expected out of each line—at the same time? At the same PDP, is it possible to deliver 250 gpm through a 150-foot 2½-inch line and 150 gpm through a 250-foot long attack line or vice versa? It’s doubtful, but it’ll be interesting to look at some possibilities.

As long as the rig has an adequate water supply, and no one is screaming on the radio to raise or lower pump pressures, pump operators might let the pump do its own thing. Regardless of the reason, a lackadaisical attitude might develop that could be inherently dangerous on the fireground.
