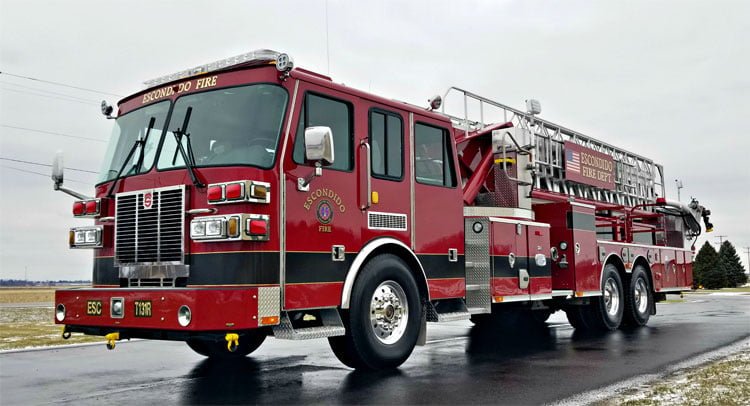 The Escondido (CA) Fire Department was running a 100-foot 1997 Sutphen SP100 aerial tower platform with no pump or water tank that was in need of either replacement or reconditioning. The department brought Sutphen’s reconstruction project manager J.R. Garrison to California to check out the vehicle and determine if it was a good candidate for reconditioning. Garrison decided that it was a good candidate and sat down with the department to discuss its list of wants and wishes. 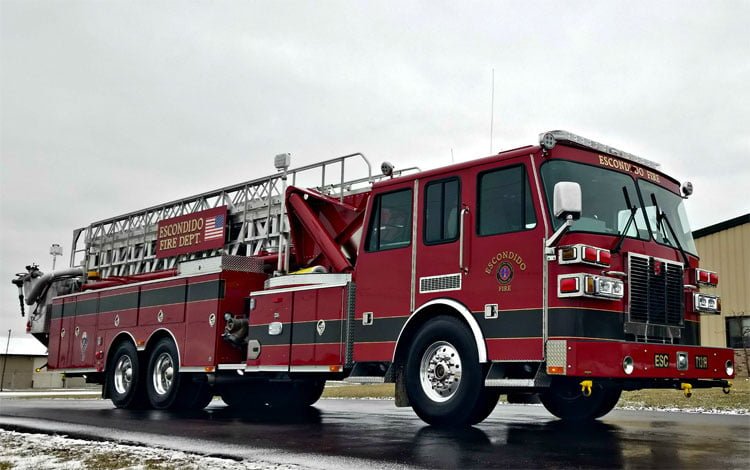 Sutphen stripped the entire vehicle down, blasted the triple wall frame with a zinc enriched primer for corrosion protection, and painted the frame black, which originally had been painted white. (Photos 1 and 2 courtesy of Sutphen.)

“The city didn’t want to purchase a new aerial platform, so we did a 10-hour assessment of the truck and then made up a list of the things that needed to be addressed,” Garrison says. “We put that list together with their list of wants, the department set a budget, and we did the reconditioning accordingly, costing Escondido about half the cost of a new truck, which would run from $1.1 million to $1.4 million.” 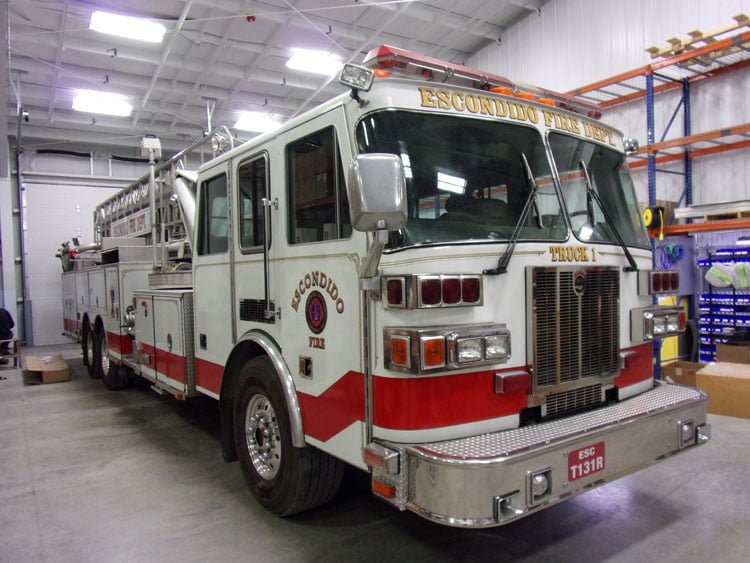 The Escondido aerial tower after reconditioning by Sutphen.

Garrison says that the original 1997 platform’s frame, chassis, cab and body were painted white. “We stripped the truck down, pulled the ladder off, blasted the triple wall frame with a zinc-enriched primer for corrosion protection and painted the frame black,” he says. “Our body shop did all the frame paint and also serviced the differentials. In addition, we put on completely new springs, new brakes, and new steering components.” Wheelbase on the aerial platform is 252 inches, overall length is 48 feet, one inch; overall height is 11 feet, 4 inches; the front axle is rated at 21,500 pounds; and rear axle is rated at 40,000 pounds. 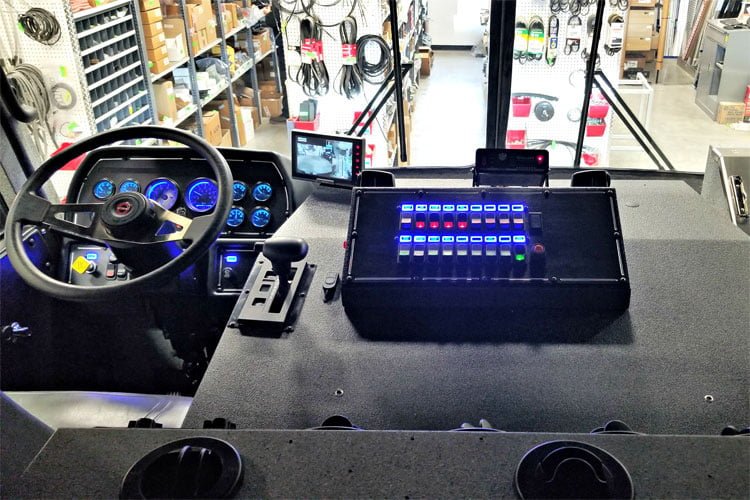 The reconditioned Escondido rig has a Brigade 360 degree camera system that can also be used for jack deployment to avoid obstacles. (Photos 3-7 courtesy of Escondido Fire Department.)

“The ladder got acid washed, and we installed all new slide blocks, cables, shivs, and other hardware,” Garrison adds, “and completely new hydraulics where the controls were set up in the L1 compartment just like the department’s 2014 Sutphen SPH100 platform.” Sutphen also sent the vehicle’s Caterpillar motor back to the manufacturer for reconditioning, the Allison 4000 EVS transmission back to Allison for servicing, and the 7-kW Smart Power generator back to its maker for rebuilding. 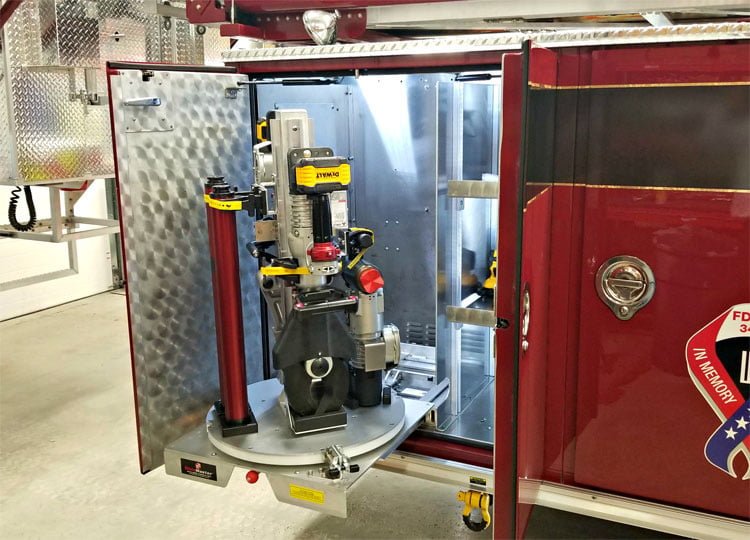 The L5 compartment has a lazy-Susan type mounting to hold the department’s hydraulic rescue tools.

Jeff Ratliff, captain at Escondido Fire, says for a number of years, when the platform went out of service, firefighters had to put all its rescue equipment onto engines and reserve engines. “After we got our Sutphen SPH100, we had to decide whether to sell or recondition the 1997 SP100,” Ratliff points out. “The city saw a need for the fire department to have a fully functioning reserve aerial, and when we heard Sutphen was starting a branch to do reconditioning of aerials, we flew out and examined a rig they had there. Then the city decided to appropriate the funds to do the reconditioning.” 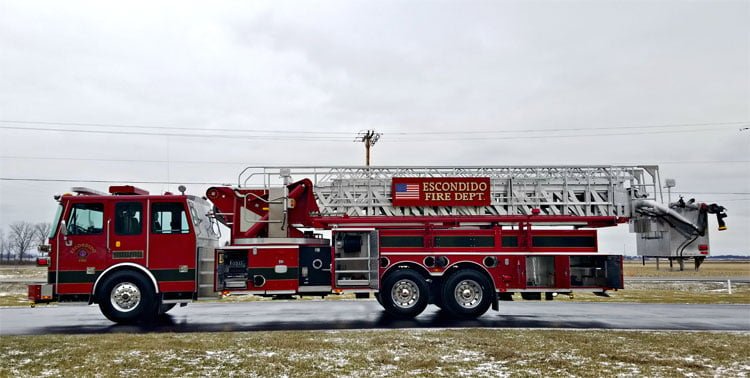 Wheelbase on the reconditioned SP100 aerial platform is 252 inches, overall length is 48 feet one inch, and overall height is 11 feet 4 inches.

Escondido’s coverage area encompasses about 46 square miles of the city and unincorporated areas, Ratliff says, where 94 firefighters are running seven engines, one aerial, two medic ambulances, three rescue ambulances, and a confined space and trench rescue trailer from seven stations. “We have about 150,000 residents in a mix of residential, commercial, and light industrial settings,” Ratliff notes. “While the largest part of our district is residential, we also have a lot of retail shops, a large auto mall, and are an up-and-growing community.” 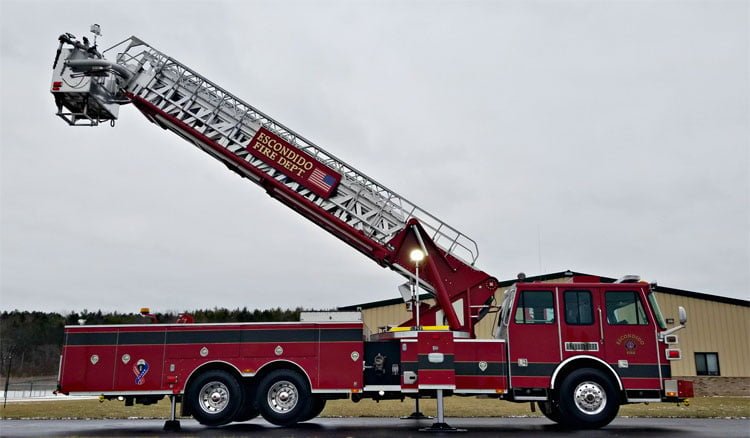 The cab of the aerial platform is set up for four firefighters in new H.O. Bostrom SCBA seats, Garrison points out. “We used a modified clean cab initiative on it, with fiberglass reinforced plastic on the walls; tread plate on the back wall; vinyl on the seats to make them easy to clean; and the center console, interior walls, and floors covered with Toff Liner spray,” he says.

Sutphen stripped the entire vehicle down, blasted the triple wall frame with a zinc enriched primer for corrosion protection, and painted the frame black, which originally had been painted white.
